You are here: HomenextHistorynextEdwardian Tea Rooms 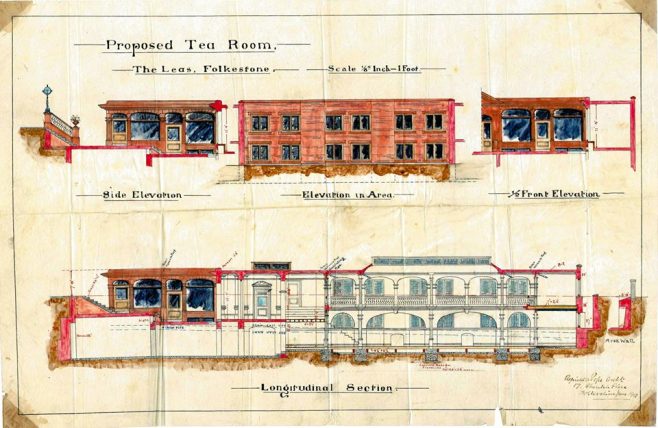 The Leas Pavilion is a rare example of a Grade II listed (Entry No 1392353) purpose-built Edwardian Tea Rooms instigated by Frederick Ralph with six other shareholders of the Leas Pavilion (Folkestone) Ltd in December 1901.  The Pavilion opened in 1902 at a time when Folkestone was becoming a fashionable and desirable coastal town.

The Architect was Reginald Pope, who also designed the waiting rooms for the Leas Lift. It was constructed partially below ground on the instructions of The Earl of Radnor to stop the obstruction of light to his nearby buildings. The Contractors were Castle & Son who removed 5000 loads of sand and soil and erected strong brick retaining walls.

The decoratively detailed front façade with shops on either side is constructed from highly moulded terracotta made by the Doulton Company. It has Art Nouveau features incorporating ironwork grills, attached veranda and stained glass. 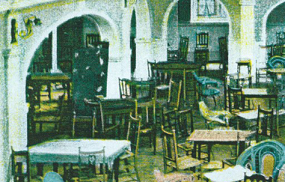 The most significant surviving feature is the internal main body of the building with its ornately moulded ceilings, galleries and centrally-placed grand imperial staircase and sprung dance floor.  The roof was constructed with vulcanite by the Vulcanite Company (established only a year earlier in 1901).

Concert Parties were introduced in 1906 on a makeshift platform, to be followed by popular vaudeville acts; in 1928 alterations were carried out to convert to a 200-seat theatre and concert hall, removing the northern gallery in order to introduce a stage.

Comments about this page